The final report of the Canadian National Consultation on Access to Scientific Research Data has just been released containing eighteen recommendations to improve open access to research data in Canada. While some of these recommendations are unique to the Canadian context, others share a close relationship with the recommendations of the International Council for Science report, Scientific Data and Information. Supported by the National Research Council of Canada, a task force was established in June 2004 to provide advice about improving access to scientific research data. 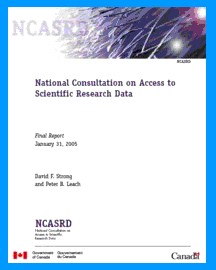 The impetus for this consultation came out of a mix of international and national pressures. Internationally, the issue of access to research data received recognition when the OECD Committee for Scientific and Technological Policy at Ministerial Level approved a declaration in January 2004 asking the OECD to take further steps toward proposing principles and guidelines on access to publicly-funded research data. Nationally, the natural science, technical and medical research communities felt compelled to respond to the 2002 report from the National Data Archive Consultation completed on behalf of the Social Sciences and Humanities Research Council and the National Archives.

This most recent report, which contains eighteen recommendations, specifically addresses the ethics of sharing data, privacy, archiving, anonymisation, data-at-risk, data management plans and training new data librarians and archivists (recommendations 5, 6, 7, 9, 10, 13 and 18, respectively). The content of these recommendations are familiar to IASSIST members since they are also concerns expressed in the IASSIST Strategic Plan.

Furthermore, the outcomes of this Canadian report are closely related to findings in a study by the International Council for Science released in December 2004, Scientific Data and Information.

These reports are evidence that increasingly common ground around issues of data access and preservation is emerging across some disciplines and national boundaries.